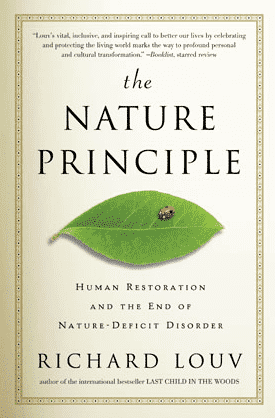 The Nature Principle: Human Restoration and the End of Nature-Deficit Disorder

The Nature Principle presents a compelling case that a conscious reconnection to nature can make us whole again and that the future will belong to nature-smart individuals, families, businesses, and communities. Supported by evidence from emerging empirical and theoretical research and eye-opening anecdotes, Louv shows that when we tap into the restorative powers of the natural world we can boost mental acuity and creativity, heal illness, increase immunity, broaden our compassion, and strengthen human bonds. As he says in his introduction, The Nature Principle is about the power of living in nature, not with it, but in it. The 21st century will be the century of human restoration in the natural world.

Richard Louv is the author of nine books, including LAST CHILD IN THE WOODS: Saving Our Children From Nature-Deficit Disorder and THE NATURE PRINCIPLE: Reconnecting with life in a Virtual Age (Algonquin). His most recent book is VITAMIN N: The Essential Guide to a Nature-Rich Life. His books have been translated into 20 languages and helped launch an international movement to connect children and their families to nature.

He is the recipient of the 2008 Audubon Medal. Past recipients include Rachel Carson, E.O. Wilson and Jimmy Carter. Among other awards, Louv received the 2007 Cox Award, Clemson University's highest honor for "sustained achievement in public service." Louv is also co-founder and chairman emeritus of the Children & Nature Network (www.childrenandnature.org), an organization helping build the movement to connect today's children and future generations to the natural world. Louv coined the term Nature-Deficit Disorder® which has become the defining phrase of this important issue. He has written for The New York Times, The Washington Post, the Times of London, Orion, Outside and other newspapers and magazines, and was a columnist for The San Diego Union-Tribune and Parents magazine.

He has served as an adviser to the Ford Foundation's Leadership for a Changing World award program, and is a member of the Citistates Group, the editorial board of the journal, Ecopsychology. He is a member of the board of directors of ecoAmerica, a nonprofit focused on climate change. He appears often on national radio and television programs, including the Today Show, CBS Morning, Good Morning America, CBS Evening News, NBC Nightly News, and NPR's Fresh Air. He travels frequently to address national and international gatherings. In 2010, he delivered the plenary keynote at the national conference of the American Academy of Pediatrics, and in 2012 was keynote speaker at the first White House Summit on Environmental Education.

He is currently working on his tenth book about the evolving relationship between humans and other animals. Married to Kathy Frederick Louv, he is the father of two young men, Jason and Matthew. He would rather hike than write.