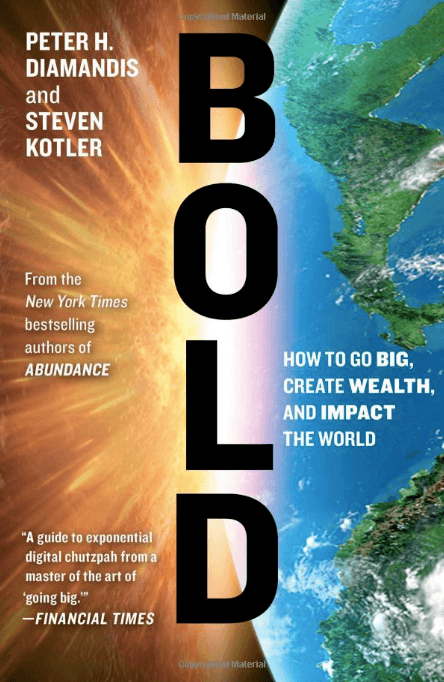 Bold: How to Go Big, Make Bank, and Better the World

“A visionary roadmap for people who believe they can change the world—and invaluable advice about bringing together the partners and technologies to help them do it.” —President Bill Clinton

A radical, how-to guide for using exponential technologies, moonshot thinking, and crowd-powered tools, Bold unfolds in three parts. Part One focuses on the exponential technologies that are disrupting today’s Fortune 500 companies and enabling upstart entrepreneurs to go from “I’ve got an idea” to “I run a billion-dollar company” far faster than ever before. The authors provide exceptional insight into the power of 3D printing, artificial intelligence, robotics, networks and sensors, and synthetic biology. Part Two draws on insights from billionaires such as Larry Page, Elon Musk, Richard Branson, and Jeff Bezos and reveals their entrepreneurial secrets. Finally, Bold closes with a look at the best practices that allow anyone to leverage today’s hyper-connected crowd like never before. Here, the authors teach how to design and use incentive competitions, launch million-dollar crowdfunding campaigns to tap into tens of billions of dollars of capital, and finally how to build communities—armies of exponentially enabled individuals willing and able to help today’s entrepreneurs make their boldest dreams come true.

Dr. Peter Diamandis is the Chairman and CEO of the X PRIZE Foundation, which leads the world in designing and launching large incentive prizes to drive radical breakthroughs for the benefit of humanity. Best known for the $10 million Ansari X PRIZE for private spaceflight and the $10 million Progressive Automotive X PRIZE for 100 mile-per-gallon equivalent cars, the Foundation is now launching prizes in Exploration, Life Sciences, Energy, and Education.

Diamandis is also an international leader in the commercial space arena, having founded and run many of the leading entrepreneurial companies in this sector including Zero Gravity Corporation, the Rocket Racing League and Space Adventures.

As co-Founder & Chairman of the Singularity University, a Silicon Valley based institution partnered with NASA, Google, Autodesk and Nokia, Diamandis counsels the world's top enterprises on how to utilize exponential technologies and incentivized innovation to dramatically accelerate their business objectives.